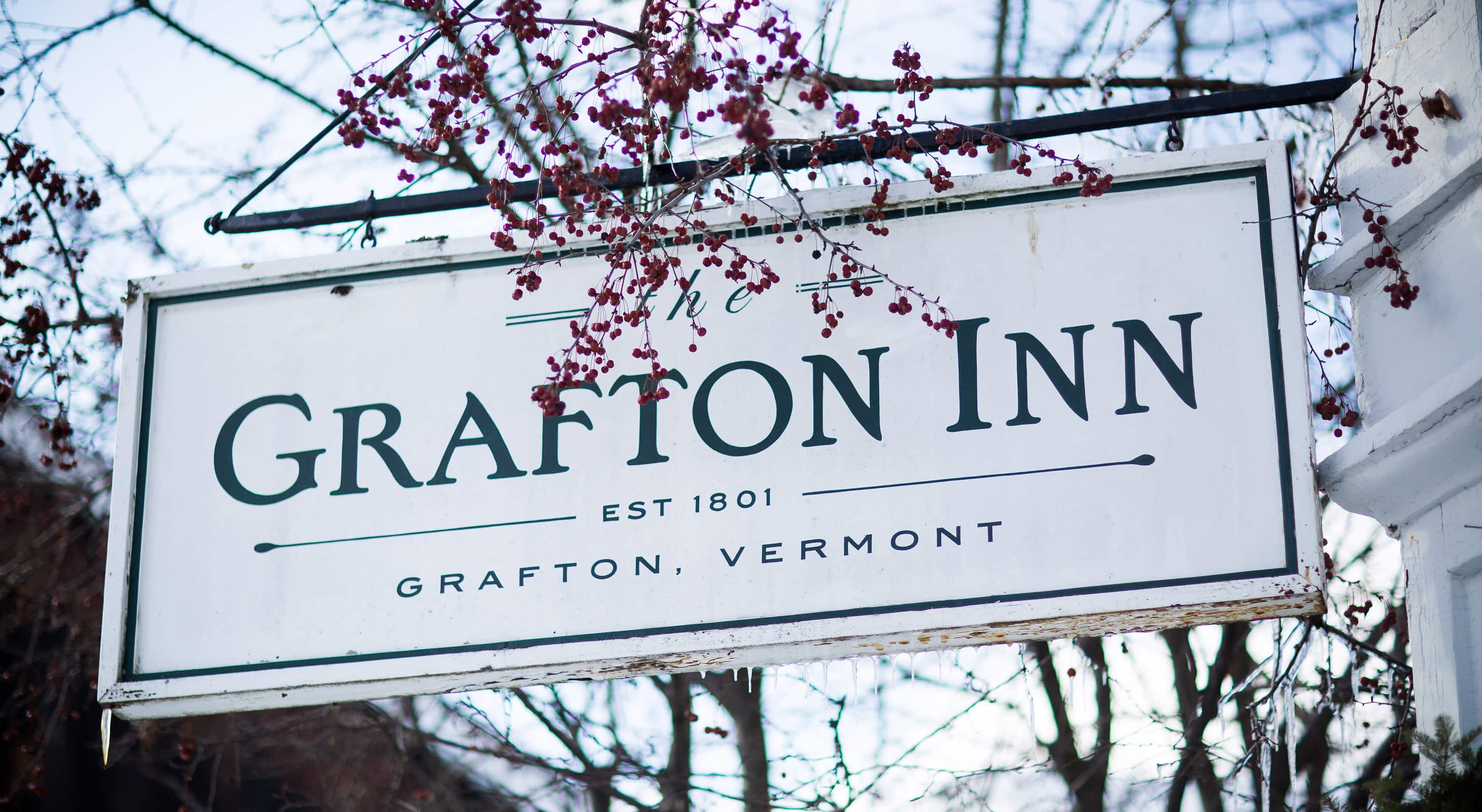 Previous Next
Play Video
An Inn on a Mission

The Grafton Inn is the cornerstone of our quintessential village in rural Vermont. The small-town charm and countless outdoor activities draw visitors from around the globe. 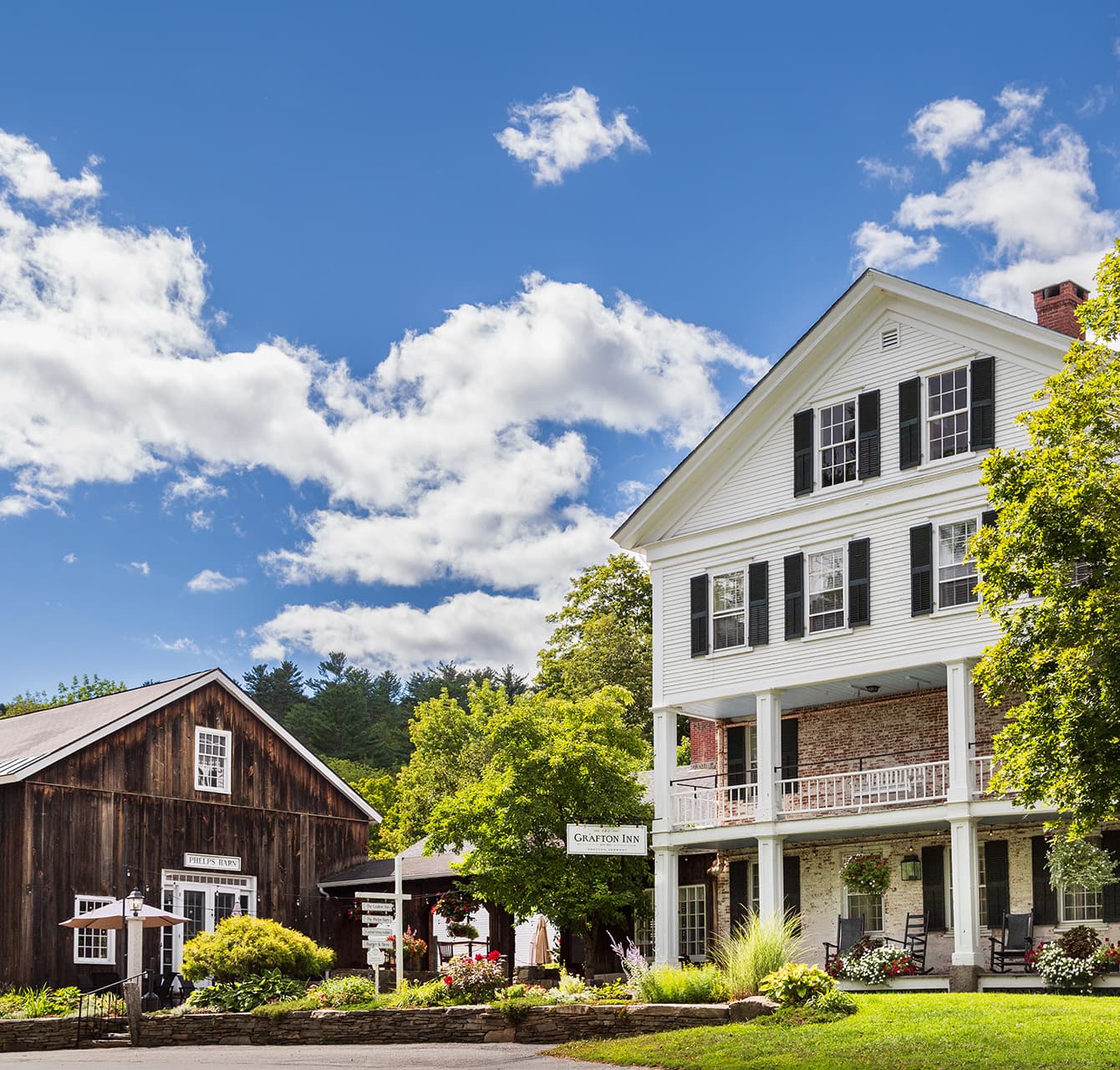 About The Grafton Inn

The Heart of a Classic & Sophisticated Vermont Village

At The Grafton Inn, we offer 42 individually decorated rooms to surround you in style and comfort. Our sumptuous local cuisine offers a feast for your senses. The hand-hewn beams of our buildings and rooms’ antique furnishings recall the 200-year history of our time-honored Vermont inn. Beyond our front doors, hiking trails, swimming ponds, and gurgling streams await your exploration. This is just a taste of the Vermont experience we’ve been offering our guests since we first opened our doors in 1801.

Enjoy the simple sophistication of our charming innthat’s at the center of our historic village community. 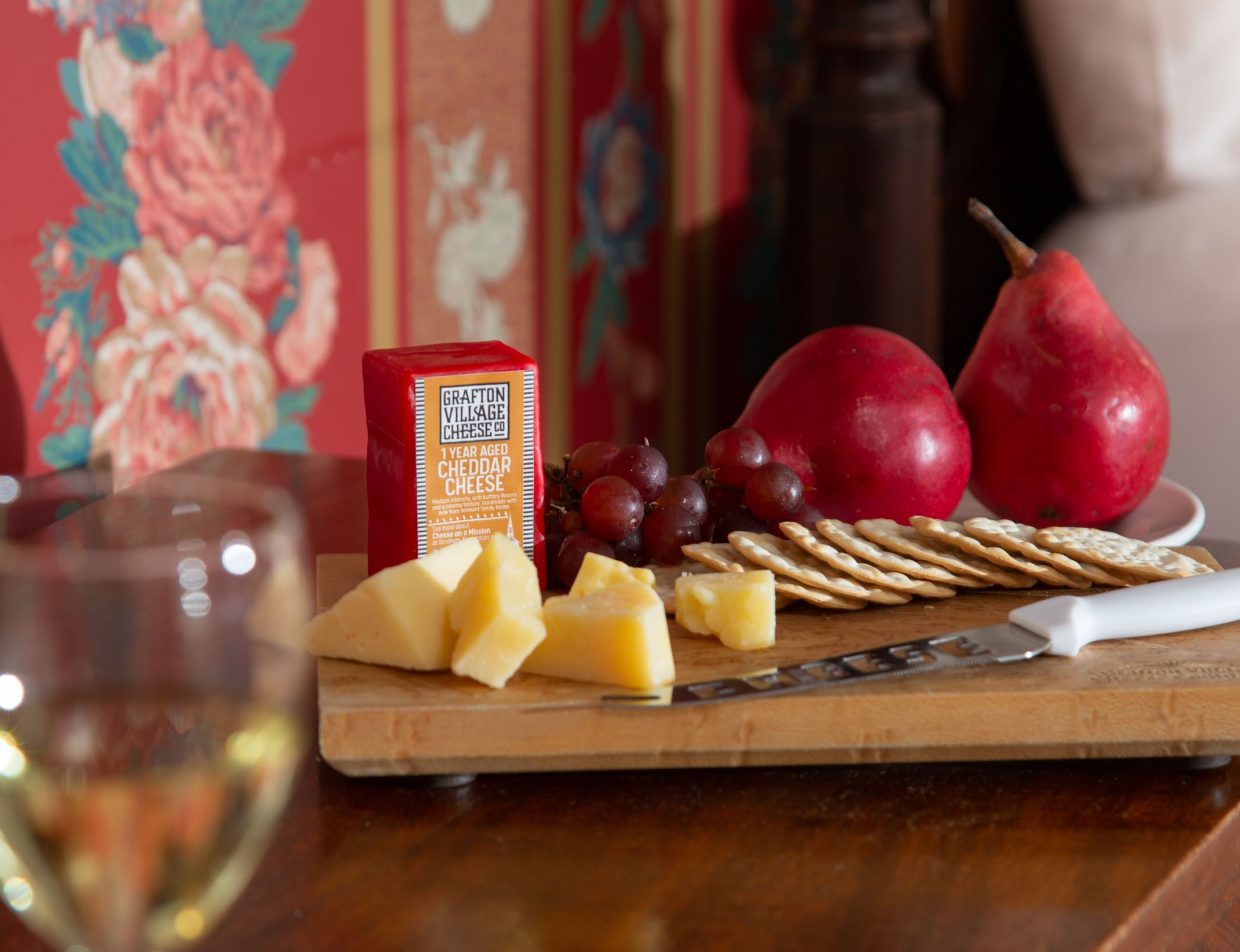 We get by with a little help from our friends: our community partnerships! From the Grafton Historical Society to local musicians, many key players help make The Grafton Inn tick. We cherish the support we receive from prominent community businesses and organizations in our close-knit town, including the Windham Foundation, Grafton Village Cheese Company, and Grafton Nature Museum. We are also proud to be a member of Select Registry, Distinctive Inns of New England, and the Vermont Fresh Network. 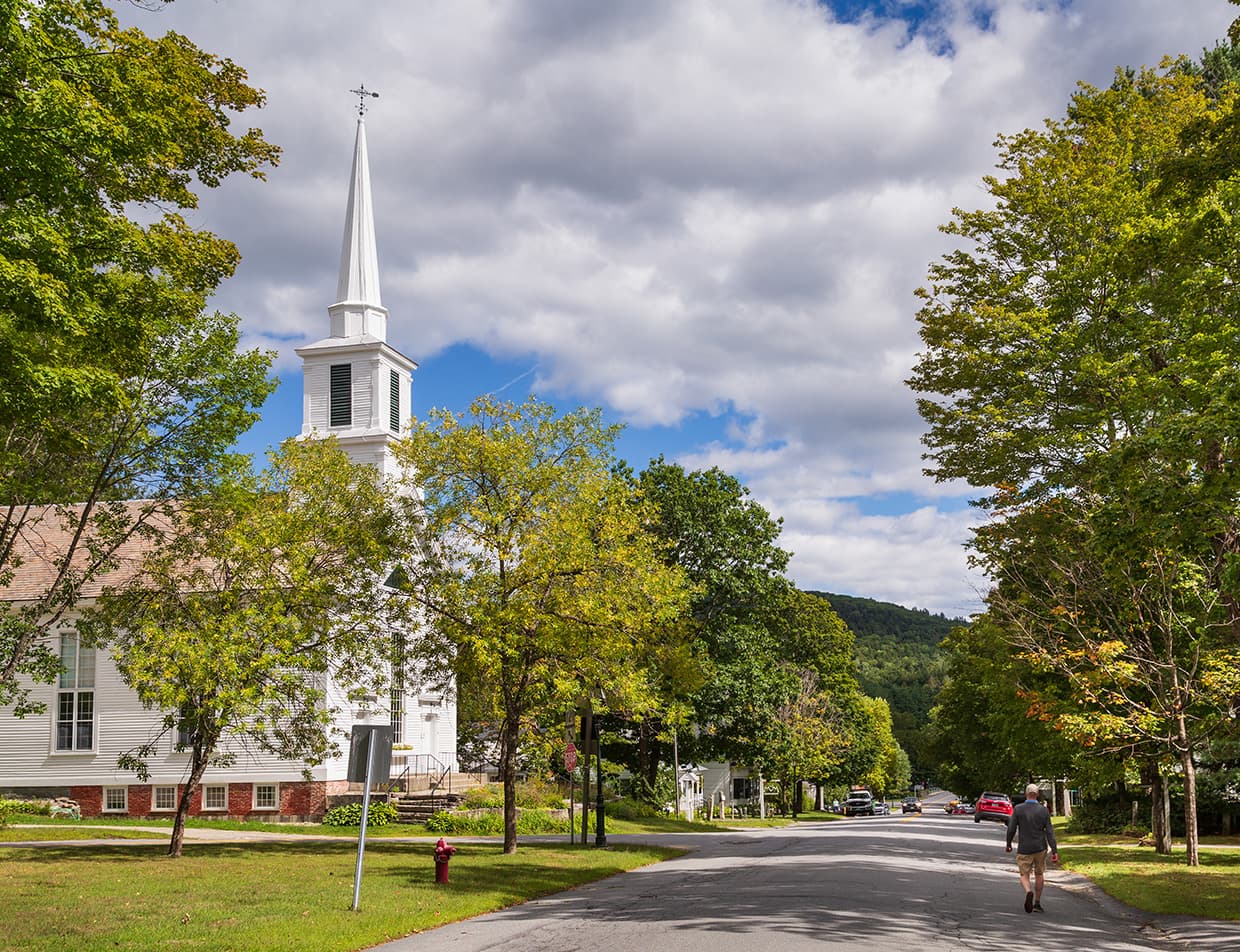 The picture of quintessential New England, Grafton Village is known for its classic beauty, stunning scenery, and rural culture. A white steeple church. Signs for the local blacksmith shop. A covered bridge over a babbling brook. When it comes to places that belong on the back of a postcard, Grafton Village takes the cake. The Grafton Inn is the cornerstone of the village, home to a small and vibrant community of just over 600 people. But don’t let our small size fool you; you won’t tire of things to do in southern Vermont. With a host of farms, historical sites, and acres of preserved land surrounding us, Grafton Village provides a gateway to authentic Vermont culture thanks to the work of the Windham Foundation. 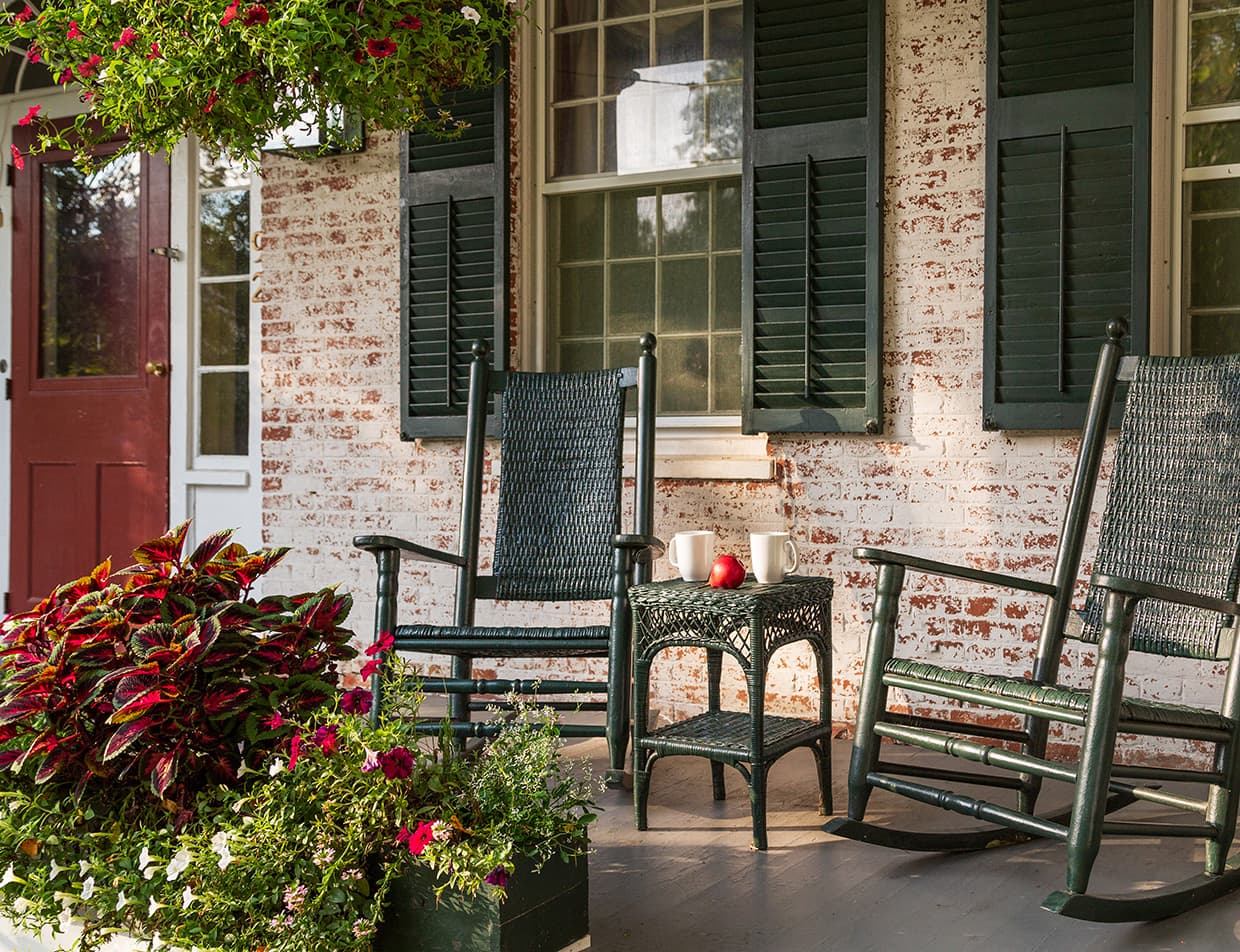 Do you adore Grafton Village because of the small-town, authentically Vermont feeling you experience when visiting? You can thank the Windham Foundation for that. It’s dedicated to preserving and promoting the vitality of Vermont’s smaller, rural communities through philanthropic and educational programs, and its subsidiaries (like us) whose operations help contribute to these endeavors. So, you’d be right to say that every stay or dining experience you have at The Grafton Inn helps strengthen Vermont’s rural way of life. The Foundation’s affiliated for-profit businesses, including The Grafton Inn, Grafton Trails, and the Grafton Village Cheese Company, all operate to further this mission directly, and the earned income assists in funding Foundation programs.

A Brief History of The Grafton Inn

Mr. Enos Lovell, convinced that people were looking for a place with good food and lodging, converted his two-story private home to a Vermont inn in 1801. The building still stands as part of The Grafton Inn. As the village of Grafton prospered, so did the Inn, and by the time it was taken over by Hyman Burgess in 1823, it had doubled in size.

By 1841, the Inn had become the center of activity for the town, so much so that even court was held there. In the year 1861 with Abraham Lincoln as president, the Inn fell on unstable times. Ownership changed eight times. During the Civil War, William and Sophia Stratton operated The Grafton Inn, but not much is known about what transpired in the Inn during this critical period in American history. Most of the records were lost when the schoolhouse in which they were stored burned down in 1936.

The most colorful period in the Inn’s history is the 35-year era of the Phelps brothers, Francis and Harlan. In 1865, Francis bought the Inn for $1,700 and sold a half interest to his brother Harlan. Harlan caught California gold-rush fever and returned to Grafton with $4,500 – a modest fortune in those days. Investing every penny in the inn, he likely became the inn’s first true benefactor. Harlan added a third floor and the porches, making the building look much the same as it does today. While Harlan successfully managed the inn, brother Francis and his wife, Achsa, handled the rest of the Inn’s operations.

Popular Among the Literary Set

Popular among the literary set (Kipling was a visitor in 1892) and the “in” place for local social events, The Grafton Inn was still patronized mostly by commercial travelers who knew it as a “good place to stop.” There were notable exceptions. Ulysses S. Grant came to the Inn on December 19, 1867, while campaigning for his first term as President. The Inn has played host to other famous guests: Daniel Webster, Oliver Wendell Holmes, Theodore Roosevelt, Woodrow Wilson and Ralph Waldo Emerson.

Grafton and the Tavern Begin to Decline

By 1903 the Phelps brothers had died and their widows sold the Inn to Norman Blodgett who ran it for 27 years. Not much is known of the Inn’s history during these years, but we know they were not good years for Grafton. By 1920 the population had shrunk to 476, 1,000 fewer people than had been living in the town a hundred years before. Come 1929 and the crash that ushered in the Great Depression, Innkeeper Blodgett (probably anticipating what lay ahead) sold out. Harry and Cecelia Dutton, who took over, were able to keep the Inn open through the worst of the thirties – no mean feat. Not much happened at the Inn during these bad times – as not much happened anywhere else. People “hung in there” and waited for prosperity that was “just around the corner.”

By 1937 the Duttons didn’t feel like hanging in there any longer. Neither did a lot of innkeepers who followed them. Ownership passed to the Perrys, the Dettmers, the Wristons, and the Walkers. The Dettmers acquired the Homestead property and added it to the Inn’s facilities, and the Wristons built the pool area. But they were all fighting a losing battle. The slick new motels and the chains were taking over. The small old-fashioned independent hotel just couldn’t compete. Times were changing and the Inn – along with hundreds of other small inns – had had their day. Another era was coming to an end.

The End Was in Sight

In “the good old days” people put up with the most primitive facilities, as there was no other choice. Suddenly they demanded and received modern plumbing, private bathrooms, hot and cold running water and central heating. The Inn, sadly lacking in most of these amenities, went into decline. It could stay open only during the summer months. Revenues dried up. The cost of “modernizing” was prohibitive.

By 1964 the Inn was in a sad state of repair and in dire financial straits. The end was in sight. Then the Windham Foundation came along and a new age for the Inn – and Grafton – began.

As the creator of the Windham Foundation, Dean Mathey has influenced life in Grafton more than any other individual throughout the town’s history. A man of many talents – financier, philanthropist and super-star athlete, he gave of himself generously in expressing his love for this tiny community.

Dean’s involvement with the town began just like that of many present day visitors: he came to savor the peace, quiet and rural beauty. But having had a longstanding appreciation of historic architecture, he was distressed to see that several fine buildings (the Inn included) were falling into disrepair. Never slow to develop a good idea, in 1963 the Windham Foundation came to be. And what good fortune for The Grafton Inn! About a year after it had been purchased by the Foundation in 1965, a major renovation was completed, and no expense was spared in giving it the finest modern conveniences while meticulously preserving its country-inn character. Elizabeth and Mathew Hall, 1st cousin to Dean and the Windham Foundation’s first president, were largely responsible for purchasing everything from the antiques to the linens, and their tasteful choices still dominate the décor of the inn today.

True to Vermont, Then and Now

As a historic building, The Grafton Inn is truly part of the Windham Foundation philosophy. And what we do every day supports the Foundation – and our goal – of giving back to Vermont. Under the leadership of the Foundation president and CEO Bob Donald, we work to provide services and programs that benefit both our guests and Vermont.

We are the host of Grafton Conferences. Our southern Vermont restaurant is part of the Vermont Fresh Network and dedicated to using as many local products as possible. We’re constantly evolving and growing to provide our guests with the best service possible, while keeping true to our roots and to Vermont.